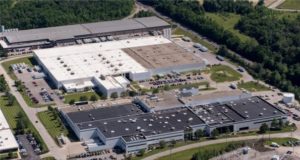 A major Cosmetic’s facility had to modify its factory floor due to growing cybersecurity concerns. The facility site consisted of two large factories that were over 1,000,000 square feet. This site contained over 50 industrial servers, over 600 computers across the factory floor, and needed to keep the daily operations running smoothly. Every computer and server required an ethernet connection to be modified, and every IP address changed to minimize the cybersecurity risk.

The cosmetic facility had no idea where to start in the process. They knew that they needed an assessment of the current systems and software that they had installed. Plus Group was tasked first with auditing the existing IT and OT in both buildings on the campus.

The facility had allotted minimal downtime to allow for this process but need Plus Groups’ expertise for a strategy on how to reconfigure to meet clients timeline restraints. Plus Groups’ team of engineers assessed the customer’s current configuration and set up and determined where to start and how best to tackle the transfer for the least amount of impact and downtime to the facility that runs 24 hours a day.

Plus Group worked closely with the facilities Corporate IT, Plan Operations team, and Technical Teams. Through many collaboration alignment meetings, everyone settled on a six-month plan to change all of the IP addresses across four separate downtime windows. The most prolonged period of downtime took less than one weekend.

Over this period of change, Plus Group had to change each IP address and implement code so that the old IP addresses could still communicate to the new IP addresses over the 4 different shutdown phases to continue to run plant operations smoothly in between having the old and new systems. Plus Group also had to implement switches to make the ethernet run and communicate too.

Plus Group set up switches and V-LANDS (virtual networks) and ensured that they fitted within corporate policy. When they came across firewalls, they performed firewall modifications with the help of Corporate IT; the modification was approved. We also worked with the facilities existing IT team to understand how they defined programming and their current systems while ensuring they understood how the implemented new systems ran. This project was seamlessly performed over six months and was a $600,000 project.

Plus Group completed all modifications and updates needed for servers, computers, and the new ethernet and IP addresses to minimize cybersecurity threats with minimal downtime to their facility and bottom line. Plus Group was on-site during these six months and talked endlessly with the client to ensure proper transfer and educate their IT, OT, and Operations Team on the newly implemented systems.

For more information about this project or any other project from Plus Groups, please contact us using the form below.
Previous Next